As I made my Sunday morning coffee this weeekend, I thought about what knitting I wanted get done. Actively on the needles were my Zweig and my July rainbow socks. I knew that I wanted to finish the socks first thing, but where to go after that?

I have, of course, another pair of July socks just waiting to be cast on and that sweater has been calling my name. I really want to be done with both before the end of the month. August is my birthday month and this year I want to cast on birthday socks and a birthday sweater. However, finishing socks, casting on socks, and finishing the body of a sweater is a tall order, even for a Sunday. I decided I’d have to pick a couple.

Over that first cup of Sunday morning coffee, I finished up the July rainbow socks. These socks have been good travel companions. but it felt good to get them wrapped up. 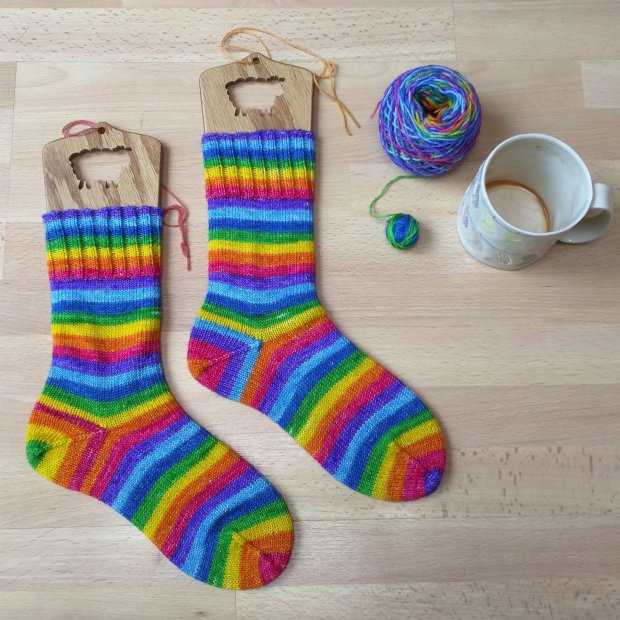 This is the 13th pair in my Box O’ Sox and the 7th pair of rainbow socks for the year. The yarn is Knitterly Things Vesper Sparkle Sock in Prisma, the July colorway from the 2017 rainbow of the month club. 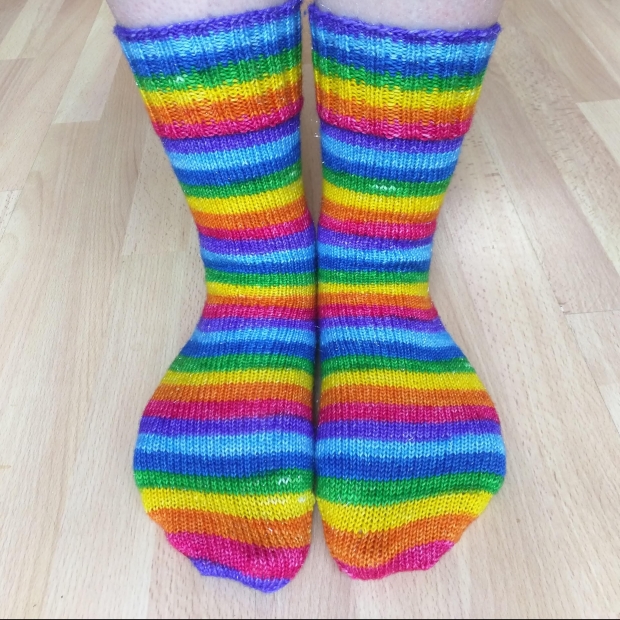 So pretty and summery. I’m starting to get really excited to see how the fall rainbows knit up, but we still have August to knit. Moving right along, I opted for casting on the next pair of socks. I’d rather keep the sock train going. We’ll be traveling over my birthday so the birthday socks will be first on the docket in August, anyway.

My July light socks came with a contrast mini. I wasn’t really feeling like doing heels, toes and cuffs, or even just heels and toes. I tend to just do contrast toes and don’t even do that very often. However, with my new found love of colorwork, I had an idea. What about adding a little contrast in on the leg? 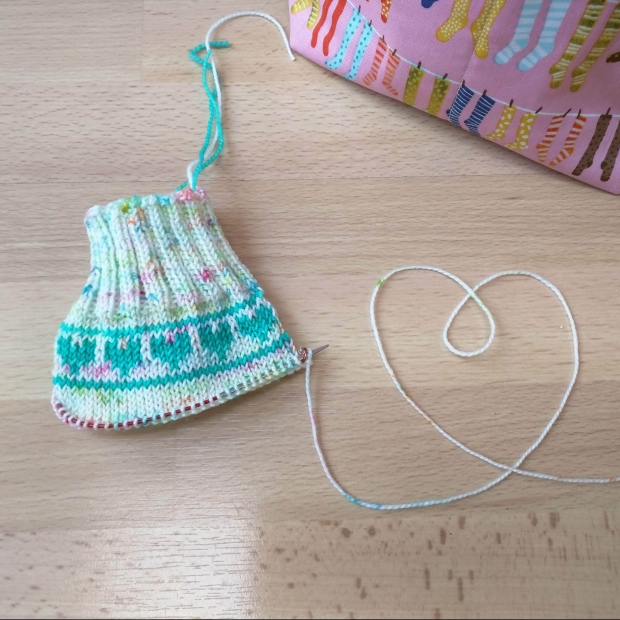 Oh. My. Goodness. This, this I cannot stand. I took the heart motif from Dale by Molly Klatt of a Homespun House. I’m not following the rest of the pattern, but those hearts! I love the teal with the speckles, these are so much fun! The yarn was a sock set from Hooker’s Corner in the Tippy Toes colorway.

With those cast on, I turned to my sweater. I don’t think I’ve shown it on the blog in quite a while, but mostly I’ve just been trundling down the body knitting little cable x’s. And so that’s what I decided to do last night. A few more repeats, trying to get close to finished. I knit the body to about 1″ shorter than called for, tried it on and voila! Perfect length. I think I have a short torso. I’ve been shortening everything. 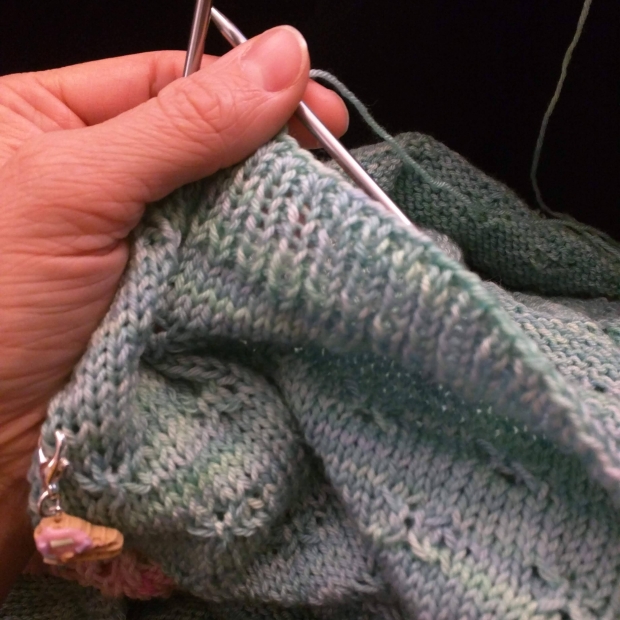 Anyway, I knit the ribbing and tried two different bind off methods. I wound up with a simple bind off in pattern and I think it looks nice and clean. I got the whole thing bound off and ends woven in before bed. I can’t believe I checked all three boxes! I thought surely something would get left out. 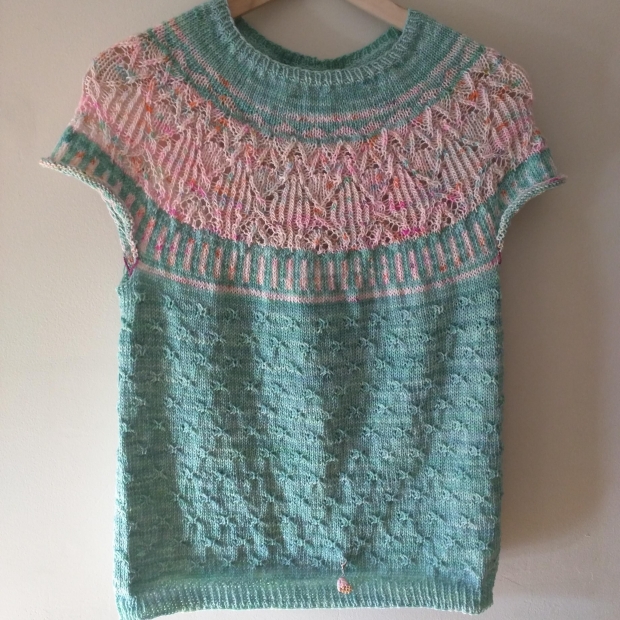 Sigh. I just adore it. I am so glad I did the texture pattern. It really adds something special to the sweater. Everything about this is magical so far. The pattern is Zweig by Caitlin Hunter of Boyland Knitworks. My main color is Skein Top Draw Sock in Japanese Slippper and the contrast color is Nice & Knit Sock in Old Bay. 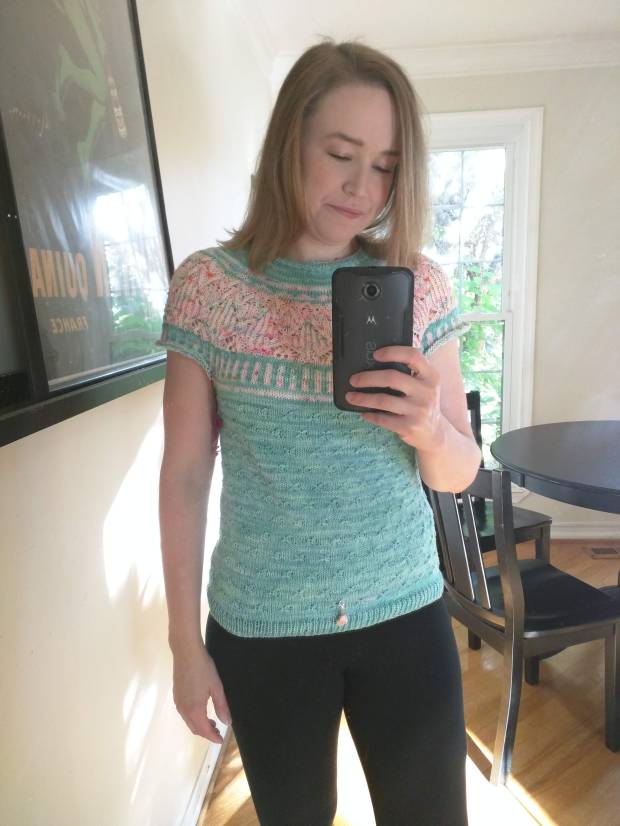 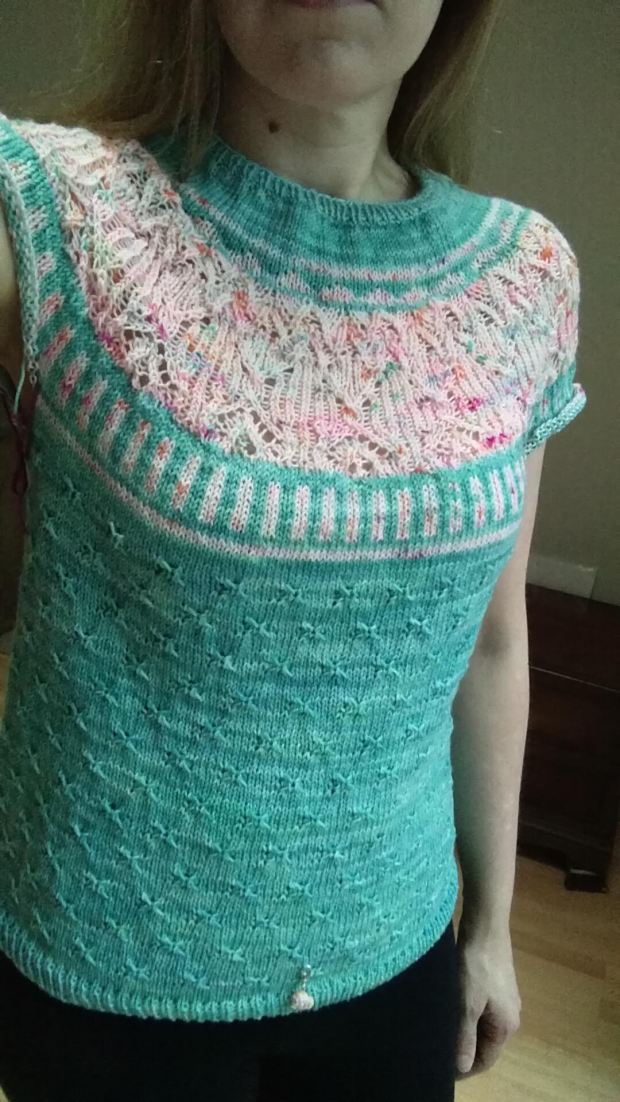 It was difficult to want to take the thing off this morning. But it isn’t destined for cap sleeves, and I’m having so much fun knitting the thing, anyway. 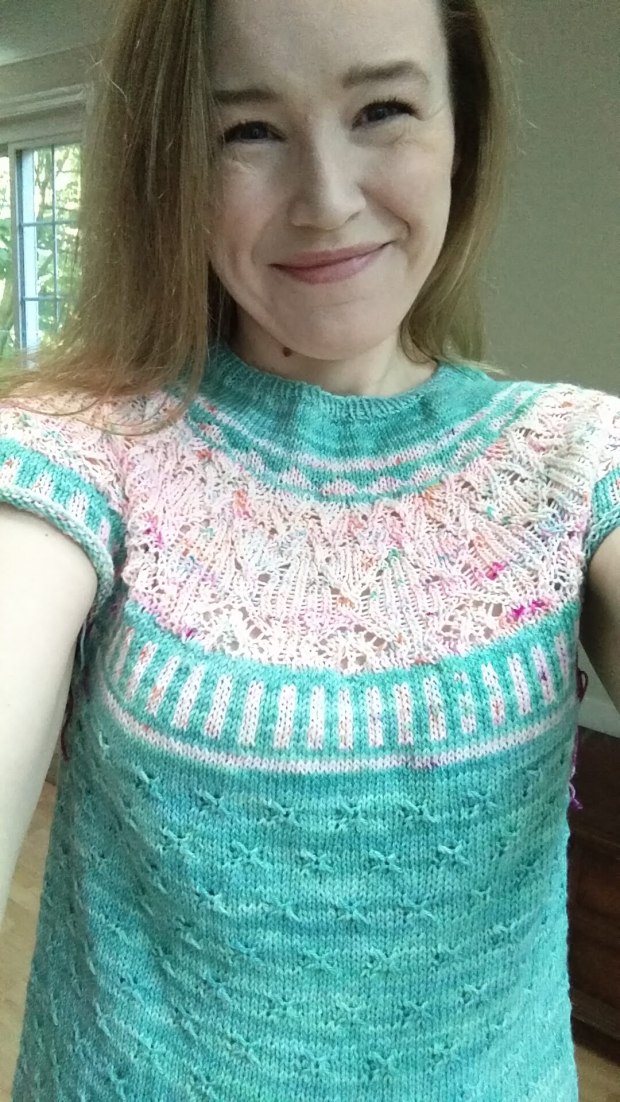 2 thoughts on “Definitely not all three.”